In the meantime, please enjoy this always-relevant piece of creative non-fiction from February 2019: 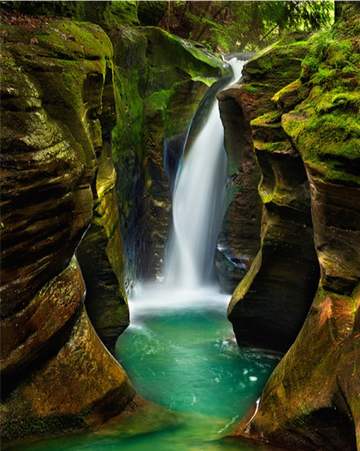 ​North to Canada
by Adam Randolph
​
I drove North up I-675 in the direction I’d never driven. I’ve lived here in Dayton for nearly a decade--during the school years at least--and now employed by the university year-round, I finally determined my time to explore, I guess.  In actuality, I’ve taken North Korean nuclear threats and CNN’s clips of intercontinental ballistic missiles as inflammatory reasons to practice die-hard survival methods en route to Canada; I’m hoping to use a natural cave to stop the bomb impact or fallout.

I first heard of Hocking Hills from some pretty inviting images portrayed on Facebook. A floral and grassy set of cliffs with a waterfall background all leading down to some probably forbidden pool of wonders, and possibly viruses. Looking back at what I believe was linked to the Facebook Post I saw: “Nope, this isn't a scene from Lord of the Rings...it's Ohio! Hidden away in Hocking Hills State Park.”

I didn’t care about what Instagram-type filter was probably used to reel me in.

I cared about such natural  beauty being right in my backyard and me having
not yet known about it.

I pulled through a few obvious all-White towns. Pick-up trucks. Bigger pick-up trucks. Horses and cows. Sheep and llamas. Confederate flags of the North. Nothing I’m not used to en passant.  A small town you would think you could hear ghosts in at night.

My GPS showed me I was 15 minutes or so from Rock House, the only true cave in the park according to my Google searches. I decided to stop and completely fill up on gas and grab something extra to drink, more than was in my bugout bags, for safety measures. I remind myself I’m Denzel Washington in The Book of Eli. I’m being on my first road trip alone, actually expecting chaos to start up.

​I exited my car smooshed close to the pump. Goal-minded and averting oppressions of the non-lookers. It would be one thing to have walked up in a diner full of eyes piercingly hungry for solidarity in a White-town – I experienced that as a child then again like just a year ago. It’s another to be treated as if your very presence doesn’t exist.  This comfortable atmosphere must know to pretend Blacks don’t really be here, I guess.

I walked to the station for water, past a full statured man who wouldn’t look at me and I’m pretty sure behind a woman who didn’t think twice about holding the door open for me. I aggressed confidently over my nervousness through the small store looking for those clear cooler doors in every gas station. A Black person or two might have meandered in and out during that time and I thought about how hypersensitive Blacks like myself must come in here all the time. I watched the clerk look to the customer in front of him in a way that let me know he’d just been looking at me.

I’m relieving myself outside in the restroom I might’ve managed to ask the clerk about. Conscious of not touching much of the contents around me, I dared myself to read the writing on the wall closest to me more than my subconscious peripherally already was.  By popular demand: “Fuck Hillary,” “Vote Trump,” “Make America Great Again!”  Posts like these still had trolls, but only in puns I can’t remember; no voice lashed back out. I used my elbows and jacket sleeves to get out the unsanitary place while trying to be respectful for some reason.

Some pretty cool choppers were parked in anarchy just away from but not perpendicular with the parking lines they avoided. I saw their possible owners swaggering nearby and calling at each other’s company as if drawing invisible lines of vocality for me to cross while I had better recognize they had nothing to do with me. Walking through to my car, I actually feared that they would be able to tell I had a permitted weapon on me. I thought of how they would just use it as a weapon against me, by physical removal due to strength in numbers or by unanimously telling authorities I had used it as a threat so they pulled out their own more powerful weapons like the tow truck guy in Men In Black condescendingly saying: “Pleeease!” I thought about how easy it would be to disappear there. I thought about the ways slavery had adapted to time to never go extinct but still speak and work diligently  as I stepped down into my car where I could finish being confidently nervous.

I came on this trip wearing my pharaoh-inspired beard and my Native American poncho, MADE IN CHINA, bought off Amazon. Before heading up on N I-675 earlier in the day, I had to tell a woman why I wore such intriguing attire at the Burger King nearest to my home. I was just as racially alone, in Beavercreek, with my back to the Walmart where John Crawford was shot for carrying a toy gun the store had laying on the shelf in this open-carry state. I watched as a slender, seasoned-aged woman stood up and looked elsewhere pretending not to approach me from her table while walking toward me approaching me from her table. Somehow, she came with a familiar and friendly smirk of a smile. A smile that said I knew that I needed her, knew I needed to be saved, knew I was different somehow and should or could be converted at that very moment. She handed me a pamphlet and invited me to her church; but not before telling me my look is intriguing, that Jesus Christ died for all of our sins, and that they’re having STEAK this Sunday (or Saturday). I seriously considered having “steak,” then thought of all the times my worrisome brother must have fallen trap to this rhetoric once she asked me too caringly if I needed a ride there.

She asked me if I was Christian, and I stumbled, hoping to avoid the crusade-like talk I needed to have with her about Christianity being forced upon my ancestors - and that I wasn’t just going with it anymore. Instead, I told her “I’m open-minded,” partially sounding like someone’s LGBTQ activist and still feared I might be committing blasphemy. She sat down eventually, and I continued to eat while watching the other Whites having just got done watching the scene we just had.

When I arrived to a small parking lot of the Rock House Trail, I walked up a street of a hill quite upset about the not-so-nature walk until realizing the main parking lot was at the top of the hill. A sign at the front of the trail said .6 miles long and it sounded perfectly not too long. I hesitated my hike to let a couple walk past me, then saw a family goofing toward my direction, then another two sets of hikers who acknowledged me and didn’t acknowledge me respectively. There’s no chance I could get in tune with this nature alone. No chance I could get weird and veer off trail a bit to look for unseen shelter. There’s no real chance to have even the demeanor of thinking so lawlessly into my survival element while knowing how easily bad a phone call to the police, or just a racist power-bearing face, given the right description, can be.

Nuclear shelters, even the ones just for fallout, are typically low ground or underground, I think. I found myself up on an Ohio mountain more East than North looking for deep shelter in a mostly open cave. The center of this concave feature was indeed dark, so dark I was happy my bugout flashlight enabled me to assist some of the families I walked near in the cave, and get some good mojo with them, with or without the one “Thanks” from a woman who at least somewhat noticed my real love…or maybe just perceived a jigaboo moment.  To be Black in America is to never be able to know many things.

I told the woman in Burger King my poncho represented my Native American ancestors I don’t know by saying simply, “I’m Native American too(!),” with persistent nods of affirmation so much like Tourette’s.

Though almost no one ever comments on my awry beard, it represents kingship of Egyptian royalty, of which I have no idea of having any relation to, I just know the possibilities I may have had pre-slavery, pre-colonization.

A coworker I’m quite associated with constantly tells me how happy she is with our university’s Ancestry.com subscription, how easy it is to use, and what she’s found out about her family from the 1700s.  Once, I’d almost gathered the guts to tell her that’s not even possible for me.  I traveled to Hocking Hills with my poncho knowing it used to be indigenous land, hoping to somehow call the nature of my indigenous ancestors for survival during an apocalypse.

I recently saw a post somewhere online about bats performing acts of kindness to other bats in order for solidarity in times of need. In these times of need, I hope we can all recognize the need to be bats when in caves, out of caves, or wherever forever. Because as of now, I still see being Black in America as being expected to live and die so Godly about being Black in America. The idea of never being able to know things but still being called to move on. This may be the test all know at death, but it may not be the test for a people to live by.